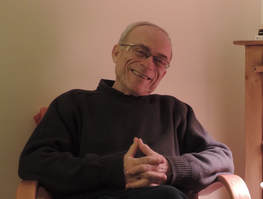 A fellow sangha member once said to me, “Everyone who walks through the doors of temple does so because they are suffering and they are looking for a way to end their suffering.” That was certainly true for me.

I found Buddhism when I was 49 years old. For most of my life, I had in many ways been two different people ... one strong with good self-esteem, one feeling embattled with low self-esteem.


​On the one hand, my personal and professional life appeared to be almost all that one could want. At least when viewed from the outside. Professionally, I had had a very interesting, varied, and successful career in which I was able to apply myself in various ways and had the respect of my peers.  I have been a teacher, legal aid lawyer, survey researcher, nonprofit executive, composer, writer, and volunteer.  On an unrelated subject, I authored We Still Hold These Truths, which was acclaimed by James Fallows of The Atlantic. Personally, I was close with my family, had a small circle of very close friends on whom I could depend, and I had had several long-term relationships, the last of which lasted 12 years until he unfortunately died of AIDS. (Yes, I am gay.)

But beneath all that success and accomplishment lay a very troubled soul. Since my grade school years, due to a variety of factors that I won’t delve into here, I was beset by severe doubts as to my acceptance by others and the conditional nature of love. These two fears lay at the core of my ego and resulted in my exhibiting some significant social dysfunction for most of my adult life.

And so while on the one hand I appeared to all to be quite happy and successful, on the other hand I was suffering on a daily basis. I was like the character in Lil’ Abner who walked around with a black cloud over his head all the time.

Then a new friend of mine introduced me to Buddhism. I recognized from the first time I went to temple with him and sat with the sangha quietly (at that point I had no idea what meditation was) that this, meaning Buddhism, was something very different from anything I had been exposed to before. I felt a peacefulness emanating from the sangha members as well as from the physical aspects of the temple itself. There was an aura, an energy, that was palpable. I decided that this was something that I wanted to explore further. And the rest, as they say, is history.

It's been a long, slow walk but always moving forward on the path. Along the way I've overcome obstacles, resolved conundrums which many of us encounter in our practice, and after years of standing on the precipice finally surrendered my ego to my true Buddha nature (see The Self in No Self: Buddhist Heresies and Other Lessons of a Buddhist Life).

I don’t know where all of this will lead ... but of course how could I? And I’m not really concerned about that. I feel strongly that if I live each day well ... in accordance with the Five Precepts ... the future will take care of itself. I live a good and full life today in the present. What more can one ask for?

My Zen practice follows no particular lineage but reflects the teachings of my Vietnamese and Korean Zen mentors. I have no other Buddhist credentials but believe I have something to say that can help others and am grateful for the opportunity to share my learning and experience through this blog and my books.  I am humbled that the blog was selected as one of the top 50 Buddhist blogs on the web (see blog.feedspot.com/buddhist_blog/).

I say this in the spirit of the Second and Fourth Precepts. And what about my ego, you may ask. Ah, it is always there; it always remains a part of us. But now when it whispers (or shouts) in my ear, I am aware ... most of the time ... and do not follow its lead, listening instead to my true Buddha nature.